Senator Lindsey Graham has apparently called for a standalone vote in the new Congress after being sworn in on Sunday January 3, on the $2000 stimulus (an upgrade on $1400 from the $600 now). But he also wants to introduce outright Section 230 repeal and the establishment of a commission to look at election irregularities.  But apparently those would be separate issues.

The USA Today story is  by Alexi Lardieri

The unemployment payment issue seems unclear, but evictions are delayed until Jan 31 as it stands now.

This is a terrible situation for many people.  Maybe inherited trusts could be tapped to help out, but general state laws get in the way.

Posted by Bill Boushka at 6:19 AM No comments:


Cloudfare and Apple have constructed a new DNS verification protocol to protect users from some less ethical ISP’s, Mitchell Clark reports for The Verge.

It would be called Oblivious DNS over HPPTS (ODoH).  It would seem to protect personal information in some cases from the possibility of future data breaches and therefore identity theft.

Posted by Bill Boushka at 6:52 PM No comments:

Stimulus talks are making progress, and the stakes have never been higher 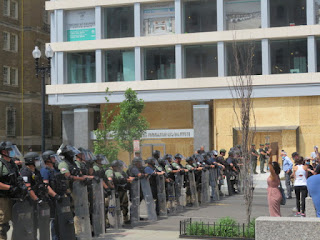 Kristina Peterson and Andrew Duehren have a detailed discussion in the WSJ of the negotiations in Congress over a stimulus bill, which are finally making progress.

Without a deal, many people will face eviction in early January.

The food lines are, to say the least, unprecedented.

Yet many of us keep on with our lives as they had been (just without the usual social gatherings).  But the infrastructure we depend on can be very fragile.

Sometimes war mobilizes everyone, voluntarily or not.

Tony Romm has an article Sunday (Washington Post) outlining sudden financial ruin for millions of Americans in January without a stimulus.

Posted by Bill Boushka at 4:49 PM No comments:

When an ex-employer gets hacked and still had your ssn 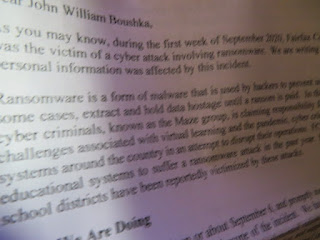 I received, by USPS mail at my residence, a letter from Fairfax County Public Schools discussing the ransomware attack on their database last September.

As I have covered elsewhere, I worked as a substitute teacher (and grader) for the school system from 2004-2007.  I stopped subbing for a while at the end of 2005 (events discussed elsewhere), graded papers, and resumed subbing, but resigned completely in September 2007.

So it is odd that they would still have my records to be hacked.

The letter came to my newer condo address, so an automatic NCOA had taken place (see Sept. 25, 2006).

The risk from an SSN hack is that fictitious accounts get created, but responsible lenders would find that address still doesn’t match.

Posted by Bill Boushka at 6:17 PM No comments: 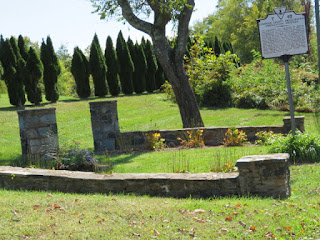 The Consumer Data Industry Association (CDIA) reports that Biden has called for a public credit reporting industry, in this article.

The agency would “compete” with the three major credit companies (Experian, Equifax, TransUnion) particularly for government-back mortgages or loans (and these might be related to the pandemic). The FCRA will be rewritten to allow considering race and possibly sexuality or gender issues as categories.  The latter is not done with private agencies.

Some observers see this idea as an opening to the development of “social credit scores” comparable to China’s.

Posted by Bill Boushka at 8:04 PM No comments: This would put anyone on the list at risk for identity theft.  Still you wonder why lenders get duped into creating accounts for fictitious people.  I sometimes see emails for Amazon and Apple purchases that don’t show up on my own cards (the Apple purchases are in third world countries or former Russian republics).

I worked as a substitute teacher 2004-2007 but doubt they would have my info there now.

Posted by Bill Boushka at 6:13 PM No comments: 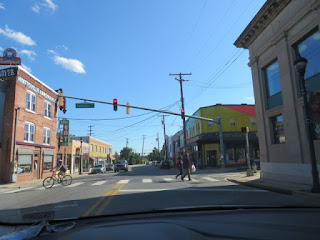 Kyle Swenson of the Washington Post reports that a relatively small number of landlords in the District of Columbia holding 21% of rental units are responsible for 50% of the eviction filings, mainly to get rent increases.

The story is especially chilling because of inability to pay rent during the COVID pandemic and business closures.

Many of the evictions would not be legally enforceable.

Posted by Bill Boushka at 7:47 PM No comments: